For a Brighter Future: Surf Competition for Kids of Montañita, Ecuador

I grew up in a first-world country in a family that was financially, in a word, fine. We weren’t the richest, but we never starved, and I always had access to as much water as I wanted. It is insane to me now how much I took for granted that in first world countries, we shower with drinkable water. We literally bathe in it, then wash it down the sink, while 700 million people don’t have access to clean drinking water at all.

Not only food and water, I had shelter, I went to school, I practiced sports for which I always had the right equipment, I had warm and clean clothes. To most of us reading this, that’s just the basics we all grew up with. But for majority of people on this planet, these things are a luxury.

While we are chasing the dream and pursuing our passions, other people in the world are just focused on surviving.

It was travelling through third world countries that really drove this fact home for me. I mean, we all know poverty exists, but actually seeing it with my own eyes made me actually realise it. The crazy thing is, i’ve found these people, scraping to survive, with all odds against them, are the ones who seem more able to be happy. It made me realise how grateful I should be, how I should stop complaining about things that, and the end of the day, are totally useless.

“While we are chasing the dream and pursuing our passions, other people in the world are just focused on surviving.”

Another thing I realised was that sharing this “luck” with others feels really, really good. I’m certainly not as devoted as Mother Theresa or Gandhi and I won’t single-handedly change the world. But if by little acts I can change someones else a life a little- that makes me feel happy. This is what they call the selfish act of kindness. We love to help people because it makes us feel good, connected and satisfied.

But selfish though it is, it does benefit both sides.

For the last five years I have been spending a portion of every year in Montañita, Ecuador with my boyfriend, Israel, who is from Montañita himself. Montañita is a small party town and as in most party towns in third-world countries, drugs and alcohol is so available to children at any age. I have seen this happen time and time again. But if a child takes up a sport, this can be the difference between them being active, healthy and driven to improve, versus drinking every day and spiralling down into drug addiction.

So this is why I came up with the idea of holding a small surf competition for the kids. Which we finally did on Friday the 28th April.

We wanted to encourage the future of surfing, for girls as much as boys, by showing the kids of Montañita how much fun surfing can be and how it can actually play a vital role in the betterment of their lives.

“The ocean could be the future for these children.”

Every kid left with a little package that contained school equipment: coloured pencils, paint, notebooks, rulers etc. It might look like boring prizes but for them it meant a lot, considering a lot of them can’t afford those basic necessities for education. We also managed to find plenty of extra prizes for first places: boards, leashes, meals, etc.

It was incredible to see how everyone put their heart into making this little competition a success: surfers from the national team judged the competition all afternoon, instead of actually surfing themselves, people giving financial support for the prizes, others bringing food and drinks. There was music, kids playing in the sand, tonnes of smiles and laughs and parents crying of happiness as they watched their child win their first competition.

Most of all, what i’ll remember from that day was seeing a close-knit village having fun, laughing, dancing, grateful to have the ocean as their backyard.

Because that ocean could be the future for these children. 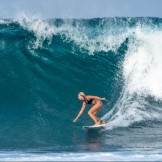