I remember when I was a kid my parents bought a book explaining sex to my older sister. I would steal it and read it in secret, then I would get aroused at the images of the naked body and sexual positions. Even if their purpose was purely informational and not made to be sexual. I felt such shame behind that very natural feeling, as if what I was doing was evil. I didn’t know yet that arousal was a very normal feeling to experience.

But that shame stuck with me with every experience I had. Every step I took felt burned through because they didn’t come out of love.

I thought I was the only one to have this feeling. Boy was I wrong.

Journey with us to the heart of South America. More info >> here <<

Was it because I was a woman? Did I feel like I needed to hide it that much because of how I would be perceived? Because of the backhanded idea that sexual discovery was reserved to the male population of this planet? Yet I felt such pride in other women being so open about their own experiences and seeing them flourish in such a beautiful way. Growing up, I couldn’t understand that almost everyone had these questions and insecurities around their own sexuality. It wasn’t new, it was not just me, it was pretty much every breathing human in this universe.

What made it so that sex was such a taboo subject, taboo enough to make me want to hide it and crawl under a rock every time something remotely sexual would happen?

When I was a kid, around the age kids starts getting curious about sex, I remember I had a crush on a boy. It was mutual, we would touch each other under the desks in the middle of the class. We didn’t know, and it wasn’t really for pleasure more than sheer curiosity. I also remember the teacher saw us and reported it. The next thing I knew I was in complete tears and shrinking into my own shame and misunderstanding in the office of my principal, alongside my parents and the parents of the boy.

Was it appropriate? Fuck no. I know that now but then, at that very young age, I didn’t. And it terrified me, it stuck. Sex is bad. Don’t do it. That’s what stuck. Not: don’t do it in public. Not: it’s natural, you don’t have to feel so ashamed, but you just can’t touch your friends under the desk at school. And I think that’s where the education failed. Because instead of sitting us down and talk it through, touch on the subject, I was left with a book and my shame. And that shame was not just my own embarrassment but how embarrassed I involuntarily made my parents that day.

If you ask me about my childhood, I barely remember anything, but that, that I will always remember.

As I teen I was quite a mix of quirky and desperate. I was lacking confidence by the pound and, God, did it show. It transferred into my actions, the words that would leave my mouth and the ones I would swallow back up constantly. If you throw in sex in that mix ,it’s quite a dangerous road that I dabbled with but… let’s say I didn’t go to the highway just then. But every experience I had was still riddled with the same shame and limitations my child-self had put down.

Want more sex talk? Check out our talk with BBXX.world founder Sasza Lohrey on all things sex, communication, intimacy and pleasure in The Salty Club.

The need for acceptance and love was laddered on there, as if it needed another layer. It became quite heavy. Admittedly, it took a while; it took riding on the highway for the first time… actually, you know what, me using metaphors isn’t helping the problem. I’m going to say it loud and clear: it wasn’t until I had sex for the first time that I understood how natural and normal it was.

Yet the shame didn’t stop there.

Now I had to feel shame around one night stands, about my number of partners, about what other people might think- as if that even mattered. But it did, and let’s remember the thick layer of self-loathing and need for acceptance hovering over my head. It was like I was constantly waiting for everything to collapse on me. Maybe my inner child was still waiting to be called into the principals office.

Instead of feeling so wrong, well, I felt so good.

And maybe that was just a positive ripple  of just gaining that self-love and understanding of my body. And also learning, it’s okay to feel aroused at weird things or in weird moments. Putting some sort of shame weight on my shoulders because of it was never going to help.

Sex is still a touchy subject; everybody goes through it differently. Sexuality has such a wild beautiful spectrum. What has worked for me might not work for you. Just like what still sometimes make me cringe might absolutely be nothing to you. It’s all about self-discovery and finding what makes you grow instead of shrivel.

Remember, a highway has many lanes, there are many roads to take. Hopefully it all takes us to a space where sexuality only comes with pleasure instead of doubts and shame and fears. No more worries about your “number” or about asking for what you like in bed. You take control of your own sexuality and don’t let anyone else taint that with shame for one second. You are worth having a healthy relationship with your sexuality, free of shame. We all are. 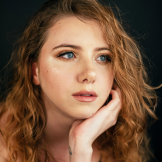 Astrid is a poet and writer from Montreal, Canada. She bases her work on personal experiences and the hope of helping others one word at a time. You can find her at @itstheotherastrid
Astrid Fender