Take Control of your Dreams

Have you ever asked yourself what was your reason for existence? Why you were put on this earth? Who you were meant to be? Well, these days, those questions seem to haunt me.

Ever since I was a child, I was told I had to fulfill certain standards. I was brought up to excel in life, in school, in sports. I grew up in a very competitive environment where your best was never really THE best. That can be a lot of pressure for a young girl, but my parents thought it would build character, which it did, to a certain degree. After a while, that pressure got to me and I just wanted to rebel. Do the total opposite of whatever the conventional way of doing things would be. But that rebellion, that way of flipping off the world made me all the more confused. And from then on I’ve been lost.

I always saw myself as an artist with a passion for design, fashion and film. But when those areas didn’t seem to bring a steady future (according to who?), I took the safe path and graduated with a bachelor’s degree in Business Management. Right after my graduation, I moved to a new province to start my career. Now more than a year later, I realize I escaped my home because I was afraid to face the real world in front of my peers. I had a feeling I would fail life and I didn’t want anybody to see. And I did fail, sort of. I ended up quitting my job, moving back home, getting a new job that I quit just a few months later and found myself right back at the beginning, not knowing what to do.

Unemployment is a funny thing. In the first days, I felt a complete sense of freedom, like a huge weight had been lifted off of my shoulders. I had so many projects in mind. I could finally do the things I had put aside because work took too much of my time and energy. I could finally be who I wanted to be. But then, that feeling faded away and it dawned on me that I had absolutely no clue who I wanted to be.

“Can you remember who you were before the world told you who you should be?” – Danielle Laporte

I’ve always described myself as being a dreamer. I love to escape in my thoughts and fantasize about wonderful things. I like to romanticize every aspect of life. I envision everything in bright, vibrant colors and those visions always seem to make me happy, until I realize they are, in fact, just dreams. Being a dreamer has always been my best and worst characteristic. I mean it’s ok to lose yourself, but just for a little while. Life isn’t perfect, it never will be. And as soon as I realized that, I became in control of my own destiny. I decided to stop escaping life and face it head on. I might not have an exact plan and that scares the crap out of me, but at least I’m choosing my own path. The people around me might not understand my journey, they might even judge it, but who cares. They don’t need to understand, it’s not for them it’s for me.

“For what it’s worth: It’s never too late to be whoever you want to be. I hope you live a life you’re proud of, and if you find that you’re not, I hope you have the strength to start over.” – F. Scott Fitzgerald

I now choose to live by this quote. I choose to not be afraid of failing anymore, because every failure brings a lesson. I choose to take these lessons with me and focus them towards building a life that excites me to my core.

So, dream on dreamer. I can’t wait to see what life brings me. 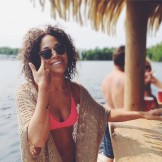