I Destroyed this House I Built

I say I built it as if I was the only one laying the foundation and cementing each brick. The truth is, I didn’t build it alone.

I built this house every time I gave someone permission to make me feel inferior. I built it every time I believed the magazines that told me I was not beautiful, every time I chose to starve my body rather than lovingly feed it, and every time I stood on the scale and defined myself by its numbers.

I built this house every time social rejection seeped into my self worth. Every time the need for third party validation caused me to compromise my values and every time I adhered to someone else’s beliefs rather than defining and defending my own.

I continued to build it every time I allowed someone to cross a boundary I was uncomfortable with, every time I conformed to the status quo rather than thinking for myself and every time I said yes when all I really wanted to say was no.

I built it every time I subscribed to society’s expectations of me and falling short of them led to feelings of inadequacy and worthlessness. This house was built every time I surrounded myself with people who knocked my dreams and knocked my self esteem. Every time intimidation caused me to cower instead of standing tall and every time I wasted energy on the media telling me who to be, where to be and what to be.

I built this house every time my bank account caused me to question my purpose and reinforced someone else’s status over mine.

Every time I chose to wear a mask rather than be vulnerable with those around me and every time I begged someone to love me.

I built it every time I defined myself by my resume rather than my character. This house was built every time I pushed away my talents due to fear of others perceptions or judgements and every time I screamed vile words at my reflection in the mirror.

I built this house every time I believed the numerous lies being yelled at me proclaiming “YOU ARE NOT ENOUGH”!

I not only built this house of self doubt, but I chose to live in it for far too long.

Though I had hoped it would give me a sense of belonging, I found myself confused and lost. Rather than offering protection, its walls restricted me, forcing me to live in the shadows rather than in the light. This house did not help me stand strong. It shook every time even the lightest of breezes whispered by. It easily cracked under pressure. It was cold and lonely. More than anything, it was empty.

Wandering aimlessly within this house, I finally realized the truth: I was being held captive. My house of self doubt was a prison. It was crushing my soul. It was destroying my dreams. It was inhibiting my relationships. It was hurting my body. It was punishing my spirit.

This house needed to be destroyed so I could escape its wrath and dwell in the light.

Slowly I started to tear this house down brick by brick, lovingly labouring over its destruction. I took a hammer to third party validation by defining my own self worth. I ripped apart the roof of beauty ideals by celebrating my own imperfect body and by smashing the scale that tempted me to listen to it instead.

The windows crashed around me as I found my voice and courageously sang my souls song. I bulldozed the concrete walls by shining my light unapologetically and deliberately, embracing the unique power of my presence in this world. I took down the door to this house by choosing a career for a cause rather than for applause and by giving myself the gift of a powerful “no” to unhealthy relationships.

With the help of truth, vulnerability, compassion and authenticity, this house kept tumbling down. As it did, I found the light pouring in more and more. It shone on my naked self as I stood in the middle of the broken rubble, all my creaks and cracks visible for everyone to see. I was no longer hiding behind any walls. Those walls that had caged my body and deprived my soul, built upon lies that reinforced negative self beliefs, had finally fallen.

Basking in the light, everything was clear. I was enough, just the way I was. I had always been enough. I would always be enough. This simple truth had set me free.

I was no longer handcuffed to unrealistic expectations or gasping for oxygen from society’s suffocating ideals. Instead, I dusted myself off and danced over the shattered fragments of what was once my house, running hand in hand with freedom.

Though my house was destroyed, my heart and soul were home.

If you are dwelling in a house of self doubt, a house built upon lies you’ve either told yourself or been told by others, please tear it down. It’s destruction is the only path to unleashing the potential within you and a life filled with the freedom to love and accept yourself.

You might be asking me, but where will I live once I have destroyed this house of mine?

The truth is, you won’t need to build another house. In fact, you have never needed one.

As soon as you accept that your naked, bare boned, wrinkled, scarred, imperfectly perfect self is enough, you will be home.

And beautiful friends, why choose a house when you can have a home?
—
Read more from Robyn on her own blog : www.robyngooding.com 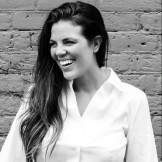