Although we are called the Salty Team as a derivative of the company name, truth is, when it comes to food, our sweet tooths are uncontrollable. We do eat really well and like to promote healthy habits… but, sometimes, there is just that sweet little devil that lives inside us toward which we totally lack any authority.

Erika is the kind of girl that will throw out the yolk of her morning eggs because of the cholesterol content but 4 hours later will eat half a box of store bought cookies in 2.5 minutes.

MC is the kind of girl that will take just one bite of a sweet treat thinking that she is being reasonable and in control but then will end up going back 15 times in the kitchen to take a new one. And every single time, that will lead to her endlessly complaining that she doesn’t feel well… and then she will say that she has quit sugar for good. And as far as I know, this has been going on for 13 years now…

When working in Bali for a month in June, we almost spent about $70 budget on a granola that tasted like heaven. A perfect balance between crunchy, sweet and a touch of salty. Perfect breakfast, snack or desert. The thing is, my morning yogurt never saw a single oatmeal flake of it. This disappearing granola mystery went on for weeks and of course, when you asked who ate it all, nobody was guilty. The phenomenon of how quickly it was disappearing was so impressive that at one point I thought it couldn’t be the act of a human. Until I saw Caitlin, granola pot in hand, making serious savage carnage. It then became very clear that she was the culprit.

Brutal but true… and it is no different for Salty Boy Israel Barona and myself.

At year one of the Salty Souls Experience in El Salvador, a local friend unfortunately died. A get-together in his memory was organized the day after and it was very important for us to show up and offer our condolences to the family and friends. We were a little uncomfortable because we were new in the hood and were not reallt aware of the habits and customs of the Salvadorian culture in these particular cases. How do we act? Should we bring anything? We were clueless and really wanted to be respectful of the situation. Dom Granger, our photographer at that time, thought to herself: food is universal! We could cook them a cake, for sure it would bring some comfort to the family!

Good job Granger, we all said. What a kind gesture! So, as the one in charge of the food department, I made an increeeeeedible, absolutely decadent, chocolate chip brownie recipe.

On that day, we went for a sunset surf session and got out of the water a little late than what was scheduled (Again. Woops.). As soon as we got home, I rushed into the kitchen to start cooking. Everything was going fine until I realized the oven didn’t really feel like cooperating that day; the brownie just wouldn’t cook as fast as it should! And we were running late! No choice… Ihad to take it out even though it wasn’t perfectly ready. But it’s alright, I thought to myself, I’ll just cut out the cooked part and leave the rest behind. But then I heard that voice in my head. That voice saying: Come on Ari, let’s make a quality test with that uncooked part you’re leaving behind. Imagine the shame if it’s not good…it happens to everybody, to use salt thinking it’s sugar…

And then entered Erika in the kitchen.  Okay Eri, just one bite, but take it from the uncooked part!

“Nobody needs to know there was more than that in the first place…” The other said.

“Plus, it’s the intention that counts…”

From that point on, I’m not really sure what happened but we just ended up with nothing left in the pan and 3 empty pints of milk on the counter…

Fuck guys, what kind of people are we, we just hate our memorial cake…?!

There is no moral to the story but If you are sweet tooth like us, I would recommend you make your sweet treats as healthy as possible. And here is one that is not too bad for you!

Makes about 1 cup of spread

1 cup of hazelnuts (roasted if desired, for a more striking taste)

↠ How to ↞

Put the hazelnuts in the food processor and activate until you get a nut butter texture (be patient!) Add the rest of the ingredients and mix until homogeneous.

This is from one of my trip to Switzerland, tasting tons of chocolate at La Maison Cailler and sending the Salty crew pictures of it. I missed the count of how many I ate… 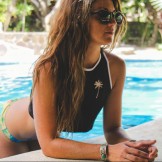 Gastronomy and surf get the best out of me and that’s why I let these heart crushes boss my existence. I am constantly seeking high emotions and knowledge through adventures, travels, food, sports, nature, relationships and music. My life is an organized chaos and I like to surround myself with passionate smartasses that don’t take themselves too seriously. If you have a strong and deviant sense of humour: hello, I like you already <3
Ariane Brien Chicoine