Real Talk: Travel, Surf and Following your Dreams as a Single Mother

‘Oh the places you will go’ by Dr. Seuss, is one of my favorite keepsake books, traveling with me over the last 3 decades. I have lived in over 13 countries since I was born in Africa, traveling since the age of 2. Packing a suitcase to begin life somewhere else with a head full of new dreams and desires is in my nature. However, since  becoming a single parent 6 years ago in Ireland, I am currently finding myself challenged, by society, the opinions and fears of others, including my family.  With all the the practicalities that being a parent of a young child must take into consideration, following my dreams this time seems  incredibly daunting.

Being a single mom has been a roller coaster ride, and I have often skirted on the edges of depression.

Regardless of family structure, early motherhood has it’s challenges on so many levels; lack of sleep, fatigue, new financial worries, disappointment of careers being put on hold, and a sudden dwindling in circles of friends and a support group to name a few.  I left Ireland almost 5 years ago and moved to Belgium with my one year old. I didn’t anticipate the language problem, a difference in the job market, the rather non-creative, more politically driven industry and society around me. As a creative I found myself isolated and mostly unemployed which was a recipe for depression.

Ever have those days when you cannot remember the last time you truly smiled, or belly laughed out loud?

Not knowing the last time you had any physical contact from another human besides a toddler can be depressing in itself.

My previously more-glamorous self stared back at me from a box of photos I’d take out from time to time to remind me of who I once was; prettier, hipper, thinner, someone who smiled and laughed often, someone wilder, and freer. Experiencing early motherhood in this cold grey city with no sea or forests to play in, felt like a cage to me. The face in the mirror showed  dark circles, from lack of sleep, worry,  and from drinking red wine every other evening alone with Netflix, as my only source of entertainment. I obsessed over new lines on my face and more grey hairs and felt like life was passing me by and days that could have been amazing were epically wasted. Somedays I just didn’t know what the point of it all was, except that I needed to take good care of my child, and mostly that was what got me up each day.

I was just profoundly stuck.

Maybe it was the effects of sunshine deprivation, and I just lacked vitamin D, with a longing for sunnier days in California from a previous time in my life, but something started to crack it’s way through in my subconscious at night. I kept having reoccurring dreams of riding waves in the sunshine on a surf board (which I had never done). I would wake with a perfectly clear dream of being in a barrel with blue green waves up above me and the drumming vibration of a board under my feet. I laughed it off but mentioned it to a friend who surfed in New York.  A year later, I had a clear dream that I was standing on red rocks, looking out to sea. It was a hot place, someplace foreign, and I said to myself; here’s the sun and the sea, I can surf, I think I’ll stay. I felt content and happy. Then I woke up to another grey day in Brussels to my lacklustre life.

And here, when you are bent in two, lost and unable to find your way sometimes this is the only perfect time for a seed of a dream to take root. In the gloom, the twinkle in the dark does not go unnnoticed. Here in the murky river of a broken persona, it demands to be listened to in a gentle-but-firm voice.

A small part of you starts to uncurl and listen.

Lacking competition, it receives a selfish and tender cultivation and begins to expand to curiosity. A curiosity spark leads to a trail, and ideas turn into hope, and eventually becomes a vision. Your soul decides, you have just one more dream that you want to make happen, even if it’s silly, and unrealistic, completely out of place in the world around you. The first action taken sets off a domino of effect. One question to person you sought for answers, turns into a a web of people to connect with and learn from and be inspired by and eventually you are standing up and outside at the top of the dark hole having rescued yourself.

Looking back at the previous self, this newer self which marches away on new legs, cradling a wanting, a wish, and a mission. I believe the voice to have been intuition, and a form of grace.

One month after that dream of the red rocks, I was invited, spontaneously by my surfer friend who I had not seen in over 20 years to join on a surf trip, which at the time was about as far out of reach as taking trip to the moon. But a short while later, I stood, low and behold, on red rocks, under the warm sun and looked out to the sea from a Moroccan shoreline. I took my first surf lessons and loved every minute of it. But also discovered, to my disappointment, that I was afraid of waves, afraid of the water, afraid of falling off the board, of what was under the board, etc. But, during those few days I was happier than I had been in 10 years and I felt alive and awake for the first time in years.  When I discovered shortly after, the writings of Janne Robinson and read, “In her waters I have found my connection to spirit. I have found my healing. I have found my strength.”, I sensed I had found a connection to something that was important for my wellbeing, and meaningful to not just myself but is also shared by a whole community of people.

Your community is waiting. Find us here.

I decided I would learn to surf, and would photograph women that surfed, despite being in my 40’s, and not living near the sea, and I would rescue myself from this grey place, no matter what.  I would start by heading back Taghazout, on a girls surf week. This specific goal fuelled a training regime in the gym. It was one simple step I could work on. This led to a change in my eating habits and started a passion for nutrition. I also started following the work of various creatives online, that led me to the work of Janne, Caitlin Creeper, and a host of others.

Jinna Yang, whose story of wanting to shoot waves, and beautiful travel photos, sparked a curiosity and led me to the work and lives of surf photographers, female surfers, female free divers, nature conservationists, people doing  amazing things all over the world. I felt likeI had found my people and wanted to also have a chance at a more light-filled, water based and again-creative existence.

Meanwhile, the gym routine made me finally, after decades of drinking just a little too regularly, realize the alcohol had to go, it was sucking my energy. I cancelled my Netfix subscription. I had work to do and no time to waste. A friend introduced me to meditation and yoga. Another, recommended a local Apnea free diving training school for my fear of water. I still had bad days where I didn’t want to get up, or where a job application rejection would send me into the blues for a couple of days, but the guilt of missing a dive class, a yoga class, or a gym workout, was enough to keep me up and out into the world of the living.

I felt I had a mission, a light burning from inside, and I learned to live each day as if I had already arrived in the sunny sea filled world.

I approached each week like a training ground for my future life. Surfrider Europe began a new volunteer chapter begin in Brussels and locally, finally,  I connected with other ocean lovers. For the first time, I thought about how I could  not only celebrate the ocean with my photography but also help contribute to the protection of it. I also wanted my daughter to experience the sea and have a relationship with nature, which she really didn’t as an inner city child, so that later in life she would want to make life choices with it’s protection in mind.

So all this leads me to today. I have so many people to thank for helping me on my journey and I have new, healthier lifestyle and habits, a new body, and created a different type of photography work that is more inline with my heart and lifestyle. I have discovered have a whole new circle, both local and from afar, that feeds my growing strengths it and gives me the opportunity  I can contribute and give back to.

The Salty Souls platform is one such circle I can thank. I know Caitlin has mentioned her struggle with the the pitfalls of Instagram and who also acknowledges it’s positive power for inspiration, so my personal story resonates with its positive side.

I have recently rebranded my online presence with my goals in mind and I successfully received interest and proposals for extended work opportunities later this year, in the area of surf/yoga/travel which would be the first big step in following through towards my goals. However, the issues of being a single mother still  can’t be ignored and I need to find solutions before packing my bags and just heading off.  I am not easily finding the stories of people in my circumstance. So if anyone out there has any insight, experience, good or bad, to share I would love to hear and connect. All photos throughout article are from Samantha Hunt’s (author of article) project Dance on Waves – Dance in Light. You can check out more of her beautiful work here. 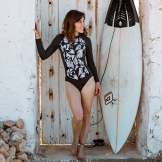 Samantha Hunt is a lifestyle photographer with a passion for the sea, connection to nature, and capturing that fleeting instant where light, colour, and subject collide, creating that magical moment of mood and story telling.
Samantha Hunt