This time last year, I set out on a one-way ticket to El Salvador. I made rough plans to spend my summer learning how to surf and to improve my Spanish, but even rough plans don’t always follow course. I got in over my head, in a lot of very real, scary ways involving tides and overwhelming amounts of saltwater, but also a few metaphorical ways that pointed me in the direction of home with a wise finger. I bought a board that was too small, and a few friendships fell apart. My time was up, and after a few months, I flew back inland where the ocean wasn’t even a topic discussed.

I expected to gain so much from that summer, but I ended up losing more and feeling a sense of heartbreak from all different directions.

When there are no waves, you find your own.

My relationship with skating didn’t start as the sort of inspirational-feminine-power you might be hoping for. Like most romances, it involves a guy.

I returned home where the comfort of the ocean was hundreds of miles away, but my boyfriend and I found common ground on asphalt and concrete. He helped me fill the void of one board for another, trading my sun-kissed skin for black and blue bruises. Passionate people want to share their passions with those they are passionate about. He tricked me with a loving hug that ended in me being lifted up and placed on a hand-me-down board set-up. That’s how it really began, and only a small dose of why I continued.

When there is silence, you can finally hear it all.

I’ll admit I was introduced to skating because of a guy, but you must be a fool if you think I do this for some sort of validation from one or many.

The guy went a separate way than I did, but the board remained with me. This time I was in a new city, alone. My board represented loss and fear, and I pushed it under my empty bed with everything else I wanted to forget. Except I couldn’t.

The fight against ourselves

We’re often times our own worst enemy, but a fight against ourselves is just a twisted mess of uncoordinated limbs. No one wins, and everyone loses. We seek distraction as a coping mechanism, when really we’re pointlessly prolonging the fight. If we allow ourselves to be vulnerable and sit with it, we open up the opportunity to process. So when I couldn’t forget, I decided to sit. In this case, it was on the floor of my room, pulling the board out from under the bed.

My life was one distraction after the other. At my job, I’d communicate with customers and coworkers, explaining how the octopus was prepared and the best method to polish silverware. When I’d go out, I’d participate in conversations with friends of friends about what albums we listened to in high school and which cheap beer we preferred. When I went to yoga classes, I intimately bent and twisted inches away from people, sharing the same sweat-heavy breaths.

But at the skatepark, I was there to be with myself.

I didn’t want to make friends. I didn’t want to talk. I didn’t want to get attention from the boys. I started going during the times when it would be unlikely to share the space with anyone else. Sometimes I’d listen to my music and sing and dance, where other days I’d scream, I’d kick my board, and I definitely cried. It was therapy, in its every form. Scary, frustrating, uncomfortable, and I needed every bit of it.

The answer to why has continued to grow since day one. My motivations weren’t always positively charged, but I eventually manipulated them to produce positivity.  There are those who want to point out the painfully obvious fact that I am a woman (as if I wasn’t already aware) and every sexist assumption and objection that comes along with it.

Guys outside the skate community respond with doubt. They question me before hearing me. They want me to prove it with explanations of “what I do.” They ask me to “do a ‘jump.’” Some speak to me like i’m a clumsy puppy, “Oh, you’re so cool with your skateboard.” Some ask me if I am a “groupie.”

If I had a dick, would you be asking me that? I’m tired of asking myself that question.

It’s interesting to watch guys’ reactions. People are more transparent than we choose to believe. There’s a way a jaw clenches that shifts the corners of a mouth to reflect condescending remarks before they’ve seeped out from between the lips; the same types of lips that gravitate toward women even after they’ve said “no.” There’s a direction eyes roll; the same type of eyes that wander toward women like we are the preferred mute images in magazines.

I’d love to tell you simply that skateboarding empowers me; it’s not that it doesn’t, it’s just that it doesn’t always. If anything, it has challenged my sense of empowerment more than anything else, but in a way that has been necessary. A lot of days, I prefer to shove sexism under the bed with everything else, but the day I pulled my board out from under there, I pulled out more than I intended. Skateboarding has highlighted my struggles with being a female in a way I can’t ignore anymore. In a way that we shouldn’t ignore anymore.

But I skate because I face challenges beyond the board.

I skate because fear does not have to be my enemy.

I skate to prove them all wrong.

I skate because doubt drives me forward.

I skate to make this statement, and

I skate because these issues are bigger than me,

So I skate because I need to and

because if I do, maybe you will too.

All images by Cory Morton 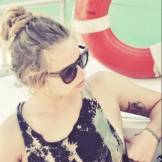